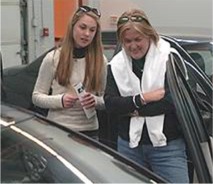 A good student and president of her junior class, Camille Spalding isn’t thrilled that her parents have installed a tracking device in her car.

“I’m not prone to speeding and drag racing. I’d honestly rather not have it in my car,” said

But Camille also understands her parents’ concerns about her driving, especially her trip across town daily from their home in Decatur to Woodward Academy in College Park.

“I don’t trust other people on the road,” said mom Melissa Spalding. “We live in a big city and it scares me to death. All it takes is for one idiot to pull her over or get her out of the car. If she’s not answering her cellphone, I want to know where she is. It’s nice that, as a parent, you can know where they are at 11 p.m. on a Saturday night.”

Two metro Atlanta businessmen are trying to give parents that peace of mind by offering them the same high-tech tracking devices and low-tech notification programs that’s used by the trucking industry and commercial businesses to monitor their fleets.

Allan Ramsay of Marietta and David Shavzin of Roswell this month launched the Safe Teen Driving Club program, whose aim is to help parents manage their teen’s driving and protect teens from driving tragedies.

The program’s offerings include: the Vehicle Tracker, which uses a global positioning satellite system to allow parents to monitor a teen’s driving in real time; a Vehicle Reporter, which records a car’s driving history that parents can then download into their computers; and a How’s My Driving bumper sticker, which gives motorists a toll-free phone number to report a teen’s driving behavior.

The vehicle tracker is the most high-tech —- using satellite relays to reveal where the teen driver is at any time, which direction they’re headed and how fast they’re driving. From home computers or laptops, parents can turn on or disable the car’s ignition, lock and unlock its doors or set boundaries their teen can’t travel beyond without parents being notified.

Ramsay and Shavzin, both business consultants, say their goal is to cut down on the number of neophyte drivers who are killed or injured.

Motor vehicle crashes are the leading cause of death for 15- to 20-year-olds, according to the National Center for Statistics and Analysis.

Last year, Georgia was No. 4 in the nation —- after California, Florida and Texas —- in teen deaths from highway accidents, the Washington-based research center reported.

“I hear of a whole lot of scary incidents,” said Shavzin, whose daughter Claire, 16, has a learner’s permit. His daughter Julia, 14, also soon will be driving. Both are students at North Springs High School on Roswell Road, one of the most heavily traveled corridors in metro Atlanta.

For a year and a half Shavzin and Ramsay brainstormed ways to help parents keep a closer watch over their teens as they gain driving experience.

“We’re not only trying to give parents preventive measures, like bumper stickers and GPS, we’re offering something for them to fall back on in case of injury or accident, or if their teenager is found at fault in an accident,” said Ramsay.

By joining the club, parent and teen agree to take a safe driving pledge that carries consequences when teens violate their driving privileges by say, driving after using drugs or alcohol, or being ticketed for a moving violation or lying about where they drove. In turn, parents make promises to their children, including agreeing to arrange for driver training, to serve as good role models behind the wheel and to not overreact if a teen calls for help.

The vehicle tracker —- the black box —- that Camille’s parent installed in her Audi last week will alert them via cellphone or e-mail when she exceeds their preset limits of speed or geographical bounds.

Dunwoody psychologist Robin Kirby, who sees many teens and families in her practice and has raised three children of her own, sees it more as a safety issue than one of trust.

“Teens often push their limits. It’s what teenagers do. It’s a matter of how much parents want to know.”

Another benefit of the teen driver club program: a break on high insurance rates for teen drivers, Ramsay said.

“The trucking industry and businesses that track their trucks with bumper stickers or by GPS satellite have in some cases reduced their accident rate by 50 percent. The industry has had phenomenal results reducing crash rates and insurance costs over the last 10 to 15 years. With that kind of performance, it made sense to us to offer these to parents.”